Nigeria has not declared June 12, 2018 public holiday, but with effect from 2019 when the date will be observed as public holiday to mark Democracy Day.

In a tweet on Friday, the Federal Government said while it will not be marked this year, June 12 “in future years will replace May 29th as a national public holiday in celebration of Nigeria Democracy Day.”

The President had made the declaration on Wednesday, in honour of the late businessman and politician, Moshood Abiola, who ran for presidency on June 12, 1993.

He also conferred a posthumous GCFR title on him as the presumed winner of the election.

There have been questions regarding whether or not there will be a federal government public holiday on June 12, 2018. 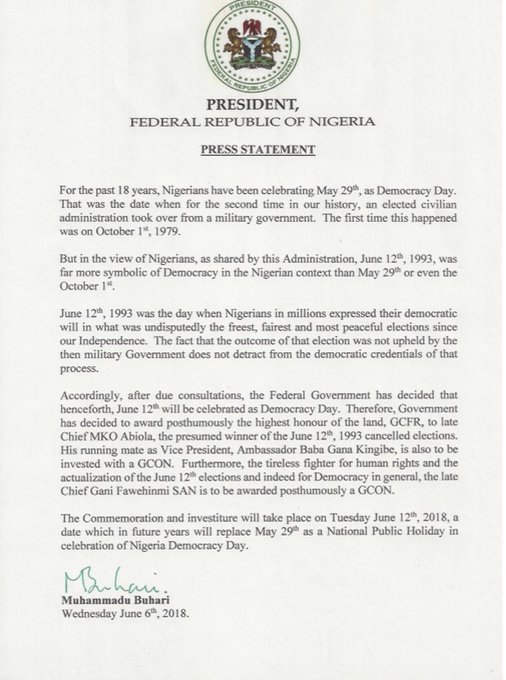 Presidential Order says June 12 “in FUTURE YEARS will replace May 29th as a National Public Holiday in celebration of Nigeria Democracy Day.”

In a tweet on his official handle, he explained why June 12 will replace May 29. He noted that June 12 is a more symbolic day.

“Dear Nigerians, I am delighted to announce that, after due consultations, the Federal Government has decided that henceforth, June 12 will be celebrated as Democracy Day.

“We have also decided to award posthumously the highest Honour in the land, GCFR, to Chief MKO Abiola.

“In the view of Nigerians, as shared by this Administration, June 12, 1993, was and is far more symbolic of Democracy in the Nigerian context than May 29, or even October 1,” his tweet read.